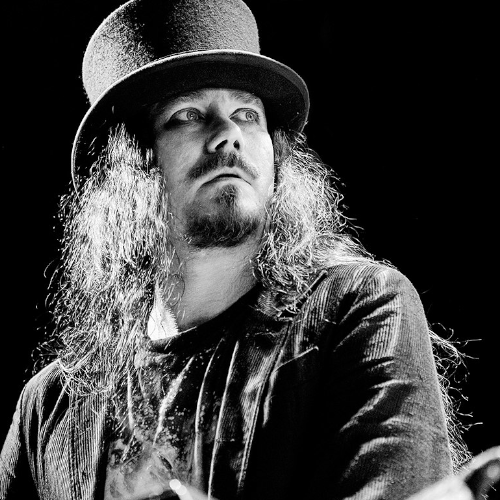 An extensive biography about Tuomas, taken from our readings of
Once Upon a Nightwish and interviews

Tuomas is the youngest of the Holopainen siblings, his father Pentti recalls that Tuomas was born with a “lucky cap” on Christmas’ day 1976.
He began studying music at the age of 7, when his mother Kirsti enrolled him for piano lessons. During the years, at school, he also studied clarinet and sax, as well as classical and jazz music.
Tuomas recalls having a very happy childhood, often enjoying time with his grandmother Tyyne, whose stories fuelled Tuomas’ imagination and fantasy.
Tuomas was a good student, he liked to study and his teachers, especially the English one, considered him brilliant, a great thinker who would go places. The English teacher seems to be disappointed and said that it’s a pity he ended up being “just a musician.”
Just to give an example of how smart he was, Tuomas learned every letter of the alphabet before turning 2 years old. One of Tuomas’ earliest memories, being 2 years old more or less, is about him sitting in a hospital with a broken legs, reading ”X-rays” on the wall. The nurses were so surprised that a toddler could read!

I AM Tuomas Holopainen,
It is fun to be AT HOME.
MY FRIENDS are in Kiteenlahti,
SCHOOL is fun,
I FEEL good feelings.
MY PARENTS are happy people,
I LIKE school.
I DON’T LIKE to be raised,
I LIKE TO DO crossword puzzles,
I’M ANNOYED BY vaccinations

Taken from Once Upon a NW, an extract of Tuomas (13 y) homework

Tuomas had a close relationship with his brother Petri, who tried to influence his tastes in music.  An assignment in second grade included the students showing the class their favourite music. Tuomas took a song by a Finnish band called Popeda. The song though had obscene lyrics, being the title ”John Holmes”. Tuomas was sent to teacher…who happened to be his mother.
Kirsti was indeed into music too, and used to teach at Tuomas’ school as well as at home. One of the students she had for private lessons was called Tarja, but we will investigate it further on…

During his younghood Tuomas was really into tennis, he took part in many competitions and won several trophies, such as the third place in a district tournament.

After an exchange in America, Tuomas joined his very first band called Dismal Silence as keyboards player in 1993. This was the beginning of his music path. Since then he played for many other bands such as Darkwoods My Betrothed, Nattvindens Gråt and Sethian.

Being the “hired hand” was annoying, and Tuomas’ impulse to start writing for himself was increasing and began thinking to form a band on his own. His first inspirations came from The Third and the Mortal, Theatre of Tragedy and The Gathering.

Legends say that his idea of an acoustic music band came to him while he was enjoying a sauna and sitting befora a campfire.

The call to army was inevitabel at those times and in July 1996 he joind the army and entered the band, where he played the clarinet. It should have been not a good memory, because Tuomas never touched that instrument ever again. Anyway, this period was good for him to write thre songs who later became part of first Nightwish demo: Nightwish, The Forever Moments and Etiäinen.

Erno “Emppu” Vuorinen and Tarja Turunen joined his idea of a band. As said before, Tuomas and Tarja have known each other since they were 13 years old and already had some music experience together.

The demo was sent to different labels, such as Century Media, Massacre and Spinefarm, but no replies were given. Soundi magazine received the demo as well and commented with these very kind and nice words: “Shitty band, shitty equipment, no commercial potential!”.

However the band did not give up and decided to get its name from the very first song: Nightwish.

The style of the band changed when drummer Jukka Nevalainen joined the group and the powerful combination between the boy’s music and Tarja’s majestic voice was the perfect formula to turn into a metal project.

The first version of Angels Fall First was born. Now they just had to find someone who would lauch the album commercially.

This person was Ewo, who listened to The Carpenter during a tour where Tuomas was a session musician and took Nightwish on. Angels Fall First saw its first ray of sun in 1997.

The Carpenter was rising the charts and reached number 15. Tuomas moved to Kuopio for study reasons and when he got the news his first thought was “What have I gotten myself into”.

Now only one piece of the puzzle was missing: Nightwish needed a bassist. It turned to be Sami Vänskä, who played with Tuomas while he was in Nattvindens Gråt.

Sami officially joined Nightwish for their second album called Oceanborn. Since Tuomas promised himself to not sing in an album anymore called another friend from Nattvindens Gråt, Tapio Wilska, to add male vocals in the album.

According to Tuomas’ opinion, Oceanborn is considered the very first Nightwish album, since Angels Fall First was born like a demo.

Not much time later, Tuomas was asked to write “a 4-minute top” song for Germany release, and it ended up being Sleeping Sun, but our composer did not like the restriction given. This made him start a side project called For My Pain…, but this one was delayed because other members were busy and could not get into a new project at that time.

Oceanborn really tested Tuomas’ creativity, he felt empy, like he could not write songs anymore. He said that in his first two albums you can really hear the first enthusiasm and “lost innocence”.

Years went by, Wishmaster was released and during a tour it happened a fun fact: Sami, among all his stuff, brought some pornographic material. When the band came back home, Tuomas’ mother found the material and Tuomas had to commit a lot to convince her it did not belong to him.

After a crises that almost put an end to Nightwish, Tuomas decided to go on without Sami and focus on finding another bassist. This was also the time when For My Pain… officialy set their debut.

Later on Nightwish found their new bassist, who was also a singer. We are talking of Marko “Marco” Hietala who joined Nightwish in 2002 for the release of Century Child.

Nightwish were now an international reality. Their name started being well-known in the US as well and with the album Once, the band started their biggest tour so far. The final date was at the Hartwall Arena in Helsinki, where they filmed End of an Era. This was not only the end of the Once World Tour, but also the end of the collaboration between Nightwish and Tarja.

The separation led Tuomas to a dark period filled with depression but not losing his willing to compose music.

While the search for the new frontwoman was going on, Tuomas and Marko wrote the song While Your Lips Are Still Red for the Finnish film “Lieksa!” (“The Matriarch” for the international release).

The hiatus from Nightwish let Tuomas collaborate with another band called Kylähullut for a couple of albums.

In mid 2007 the name of the second Nightwish singer was revealed: Swedish singer Anette Olzon joined the band and the album Dark Passion Play was released. The production for Dark Passion Play was huge. It was revealed that it has been the most expensive album ever produced in Finland at those times, but it worthed. The critics were enthusiastic, as well as the audience (despite the constant critics to the change of voice).

The second album with Anette was even greater than the previous one. Imaginaerum is released in 2011, but the following year also a film related to the album saw the light. Another world tour started but the tensions between the band and the singer go out of control and during a date in the US, Nightwish announce Anette’s leaving.

Her place is taken by Floor Jansen, known as After Forever and ReVamp singer, and after few years as session singer becomes officially the new Nightwish singer, together with Uilean pipes player Troy Donockley.

It is at the end of the Imaginaerum World Tour that Tuomas comes out as solo artist with his Music Inspired By The Life and Times of Scrooge, an album based on The Life and Times of Scrooge McDuck by Don Rosa. The album is the result of years of composing, with the help of orchestrations by Pip Williams and the vocal contributions of his friend Tony Kakko (Sonata Arctica) and his fiancée (later wife) Johanna Kurkela.

With a new formation Nightwish recorded their new album called Endless Forms Most Beautiful, followed by a long tour.

During the break followed after the World Tour of the greatest hits Decades, Tuomas, Troy and Johanna formed a new side project called Auri. The album of the same name came out in 2018 and it is something totally different from Nightwish music.

Nowadays the band seemed to have found their perfect combination and Nightwish are on top of their career. Their latest album Human. :||: Nature. saw the light in April 2020, with an upcoming tour planned (later postponed because of the Covid-19 pandemic ongoing).

Scroll UpScroll Up
error: Sorry, you can\'t copy this content!